ODIMBAR (One Day I Might Be A Raptor) was not here on 5 April 2017, but had set up his court by 14 April. From behaviour we have considered that he is newly adult-fledged, but he could be an older bird who has shifted his court. It is autumn and the courting that dominates reporting on bowerbirds is not due till spring.
As we begin this blog on 16 April 2017, we already have our hearts in our mouths, concerned that this new family member outside our suburban bedroom window will survive the competition and that his court may thrive. His day is busy: hunting, building, learning, asserting, defending, charming, singing, raucous caucusing and dancing.
And the evidence before us, of daily life, is much more complex than what one usually reads or views on Youtube, of isolated males building bowers in spring to try to entice picky females with whom their relations are fleeting. It's not like that at all here.

Fourth day: the cast and the scene and the observer

As I sit in the living room to write this on laptop, the slightly quacky "I'm busy" noises of Odimbar filter in the window. While I was out in the front a while ago he fell silent and then when I went on the road (photos below) he went high in a tree and produced a call which for now I suggest means "there's an old geezer over there, watch out, but low risk".

Yesterday and today reveal a pattern of life.

In the morning, especially two to three hours after sunrise, currently around 9am, there is a gang around the bower, Teehoops (teenage hooligan peers) who haven't gone mature, gender unknown, though it is possible to our inexperienced eyes that some of these green birds are older women. Come to goggle at Odimbar who has plainly gone crazy, perhaps even old. There are some who steal blue objects.

Today there was a very beautiful green-brown bird of alpha male proportions (whom we shall call the Pretender) who acted for a while, in Odimbar's absence, as if the bower was his, with a Teehoops audience but no evident charmed individual. Which brings into my mind as mentioned earlier the question of the biological and the psychosocial triggers for conversion to satin black bird status. When Odimbar flew back, with a new blue bottle top, the Teehoops and the Pretender jump away but demonstrate that they would have the crown if they could.

Yesterday afternoon I witnessed a period of Odimbar's life which was intriguing. It involved someone who seemed an older female who was especially wary and flew instantly into the very big Magnolia Figo (Port Wine Magnolia) at a glimpse of me and the camera. I did get to observe that for many minutes, mid-afternoon, Odimbar was diddling about outside practising his karaoki numbers while this older person was in the bower working on it or tidying it up. There was no sense of sexual engagement, there was a sense of relationship; of acceptance of roles. This bird thus gets the name Yuthiwim (You'd Think I Was 'is Mother). This definitely raises questions about traditional oohing-and-ahhing over the amazing works of the male bowerbird. I'm trying to find research info on this, but the researchers, perhaps projecting, focus on the rock-and-roll-and sex moments of Satinism, can anyone point to research on this phase. Months from breeding season, August-September at the earliest..

Yesterday I filled a long-dry water bowl in front of the bower (photo at end of this blog entry). Odimbar and Yuthiwim spent time together there. Odimbar is as aware of our presence as is Yuthiwim, but he stands his ground. I am conscious of the need to avoid such pressure of presence as to send him elsewhere. He has enough pressure from his own species.

Among practical problems for me is that grabbing movie material with the camera and putting it on the hard disk of the elderly MacBook Pro gobbles space. The 1tb hard disk is half full. 2.5gb more from the camera this morning. Efforts will need to be made within a month to archive much of the material on other discs.

There is also the question of sufficiency of equipment. The bedroom view with camera is good but it is sidelong to the bower and the whole area 'behind' the bower is obstructed by shrubbery. And we do not pick up sound outside on the inside camera without clumsy complication and expense.

So this morning I bought a 'trail camera' from ebay, the cheapest available, from an Australian seller (quick delivery) and with both video and microphone (photo above from the ebay as as was this morning 17 April).  Hopefully in place by Thursday or Friday, facing the bower.

But for now, let's step outside, see the bigger view.

At the front door, the eternally nattering earthy women seem not to notice the bower— in the distance, at the top of the photo on the right. They are busy, of course, heading up this blog.

Lets head for the driveway... 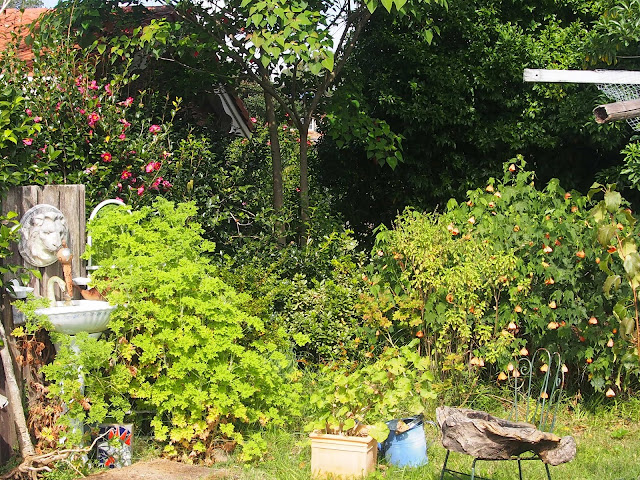 In the photo above, from the driveway you can see how the bower is in a secluded area, in front of bedroom windows, but hidden behind geraniums, camellias, azaleas and abutilon (playground of small birds, especially Eastern Spinebill, see my photo of one back here) ... with as backdrop on the southern side, a massive Magnolia figo beyond Odimbar's central stage. Many birds nest in that tree. Nearer you can see trunks of two Hymenosporum flavum, aka (Australian) Native Frangipani. These are between the bower and the house. Odimbar can climb to the top in an instant. See yesterday's movie. 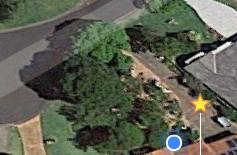 From the street the stoic Dwight, who hangs out in a tree, has a good view of the goings-on but no one else imagines what wonders lurk down there near the house. 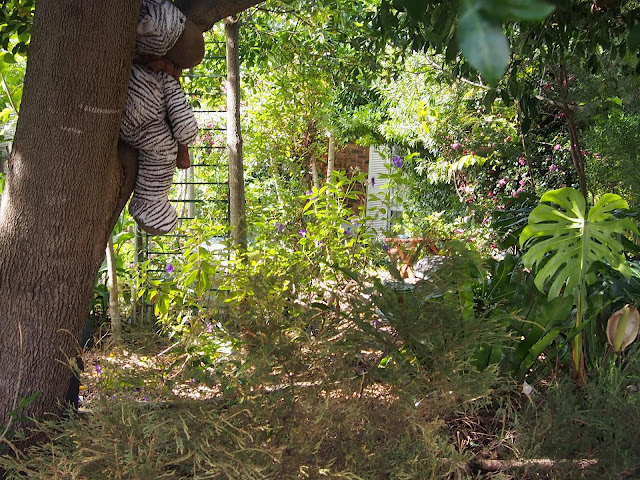 Lift the camera and lean in —see the bower? 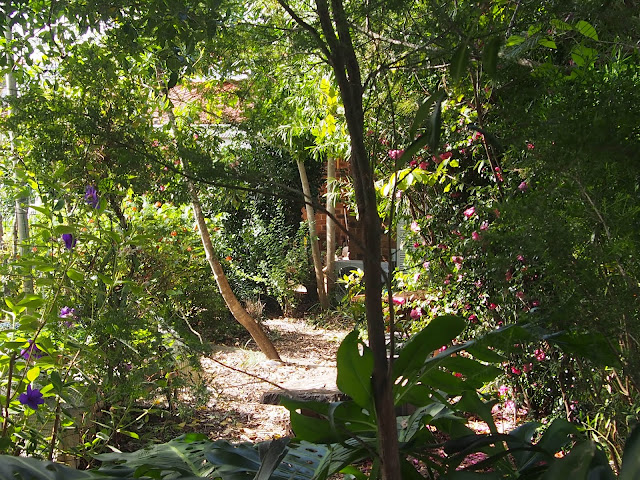 Going into the garden ... this shows the bower and the water bowl and a little of the window vantage point. This is the centre of Odimbar's domain, but his authority extends 20 metres from the bower at ground level and up to tree tops. 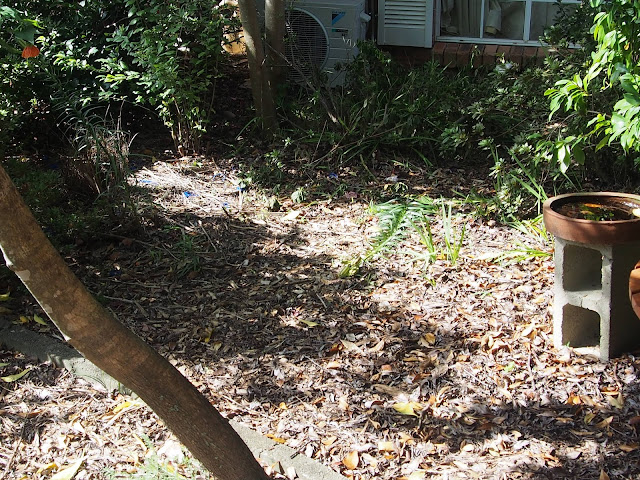 I have other things I should be doing, but this is difficult to step away from. This is only Day 4!!

Oh and on some soundtracks there is evidence of this creature who is also fond of a blue object.

We are in Nowra - see the southern edge of the map

The cast and the scene and the observer

This blog entry has useful background information.
The lead actor is the mature male Satin Bowerbird whom we have called Odimbar.
There are others with varied roles and our understanding of them grows over time.
Male Satin Bowerbirds, if they get to mature into adult plumage, do so around seven years old. Gerald Borgia and his team at the University of Maryland refer to observations of males in their site at Wallaby Creek, northern NSW, Australia, aged from 7 to 22.
Immature birds and females are green-brown and their plumage can be spectacular.
Most research observation seems to focus on the mating related activities of springtime. We begin our recording of events in autumn (April). We have Odimbar acting to role, we have green birds seeming to be courted, we have green birds helping with the bower, we have green birds practising being mature, we have green birds acting like louts, perhaps former gang members with Odimbar when he was younger.
Ride with us as we try to understand...